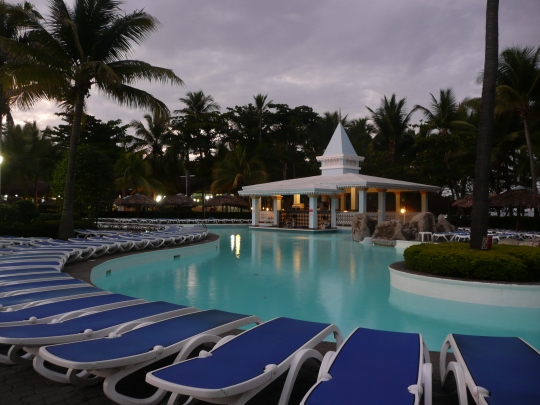 Ok, more like a lot! Rest can turn into rest-less in excess. Unless you’re new here, you should know how well (noooo) I deal with ONE rest day… But we were in paradise 🙂 so I’m not really complaining.  Just might be looking to shake things up a bit next time around.

My mom and I have always believed that we travel well together.  Both non-drinkers and not huge into the party all night scene.  We both enjoy exercising while on vacation, walking on the beach and falling into a routine of early morning coffees and lunch at the beach BBQ.  Yet the last few years I’ve felt like there was an incompatibility that I just couldn’t put my finger on.  I think this time around it came to me…  I think everyone goes on vacation with a specific purpose or goal.  And I think it’s deeper than just the general “I like adventure!” or “I just want to relax” cause while we both went into each of the trips we’ve taken together preaching a common goal of relaxation. Yet there were smaller intricacies that were just not satisfied.  I realized this year what my mom’s entire trip motivation is, and got a clearer understanding of my own by recognizing what it isn’t!

My mom is a sun worshiper.  That is ALL that’s on her mind while on vacation.  Comments such as “I just want to sizzle and fry!” or “When the sun’s out, I don’t want to go for lunch/to the beach/for a walk/(insert anything that doesn’t involve laying on a pool chair cooking yourself)” were frequently dropped.  A sun worshiper’s MAIN goal while on vacation is to come back tanned the darkest shade humanly possible.  And it’s never enough.  While I DO enjoy the sunshine, and got myself caught up in two enjoyable books while away, I’m not sure I fall into the sun worshiper category.

The joke for years has been – Better finish that book before the trip is over!  Cause I’m not likely to touch it again until the next vacation. It’s sad, but true.  Took me two years to finish The Girl with the Dragon Tattoo… It’s as if vacation is the only time when my mind can detach enough from the 100s of other things that swim around in there in everyday life to focus on reading.  So as the days wore on, and the pool chair boredom grew, these moments became more and more frequent.

My MAIN goal for my vacationing is – a memorable vacation.  I like to come back and have lots of great memories 🙂  Don’t get me wrong, there are a few!  Haha!  Like… one of the bartenders from the swim up bar asked me to marry him.  A few times.  Poor guy… I didn’t have the heart to tell him he was barking way up the wrong tree.  He wanted me to stay in the Dominican with him and the minute I got off the plane in Toronto and heard we were forecast to have -30 degree wind chill for much of the weekend, I considered getting right back on!  One thing I’ve always wanted to do since I was pretty young was go horseback riding along the beach.  It almost happened this year! There was a place within walking distance from the resort where we could have joined a group, but I without boring you with the details, it didn’t happen.  Next time it WILL!

Anyways… Before I fall into my old habits of leaving a post in the draft phase eternally, I’ll just share a few picks that speak for themselves. Riu Bachata, Puerto Plata was amazing 🙂  I’d recommend it to anyone and hope to get back there again one day.

Last note – entirely random useless fact… If you’re a chocolate covered almond fan, good for you. I’m not. I think they taste like dirt. Anyways, ever bit one in half just enough that the chocolate pulls off the almond?  Those are some ugly looking nuts! I’m not talking occasionally either, it seems to be a common occurrence. The reject nuts become your beloved treat. Someone one day must have said “what am I to do with the gnarly looking almonds that no one will want to eat? I know!! I’ll dress them up all fancy with a chocolate coat!”  Don’t judge a book by its chocolate cover? I will, thank you!  You’re not fooling me.  Chocolate covered dirt.

Are you sick of feeling like rubbish? Have you ever got close to your potential? What if, being the best version of you ever was as simple as: 1) Eating Lots of Meat 2) Moving about Outside 3) Lifting stuff!

Planning to save any penny we can