jack of all trades, master of none

So, the whole idea behind this post is to touch on a topic that came up last week during one of Coach Dave’s morning sermons.  The discussion related back to the ten elements of fitness and the goal to become good at all, rather than an expert at one.

CrossFit workouts train your body in all 10 of these components of complete fitness:

That being the case, growing up I clearly was looking at things from a totally different point of view.  Whenever I came across something that interested me, I liked to dive right in and focus on becoming a specialist.

First came swimming… from a young age I focussed on gaining all the training and badges required to get my instructor’s certification.  So much so, that by the time I was ready for this level, I was still 3 years too young and could only work as an assistant instructor.  Waiting 3 years is an eternity when you are a child.  So, after a little while, I looked for something else.

I had already started investing my time in to horses, so when I got bored with the swimming, it was an easy transition.  Of note…  I grew up with a single mom.  I was never destined to be one of the “rich kids” riding around on the best pony money can buy.  However, with some hard work and dedication I was able to gain the experience I needed to still have quite a successful go at the world of show jumping.  Unfortunately, throwing your leg over the back of a horse doesn’t come without its share of injuries.  Especially when you become the kid who gets to ride all of the crazy ones.  I was fearless, but with age this just sort of wears off.  When a fall in 2001 landed me with a broken vertebrae and separated shoulder.  I continued teaching, cause that was something I could do while I recovered, but the sands shifted for me and my confidence was never the same.

Then came snowboarding.  Same deal.  At this point, I had moved in with my dad and his new family and was lucky enough to enjoy a few winters with a membership at a private ski club.  Spent every weekend at the hill.  Self-taught involves it’s share of mistakes, but it was the only option.  Soon, I was certified as an entry-level instructor.  Then came even more time at the hill, teaching old ladies who were used to a casual coast down the hill as two-plankers to let loose a little strapped to a snowboard.

After growing up and moving away from home, I soon discovered that many of the hobbies I had known and loved as a kid were EXPENSIVE.  But the adrenaline junkie in me needed a fix.

So… mountain bike racing fulfilled that craving.  24 hour and 8 hour team relays to be exact.  Flying down a steep slope through tight single track was quite the rush, but again did not come without its share of injuries.  Not the major kind like the horse fall, but I still have a pedal-bite scar on the back of my calf that will likely be there for life. 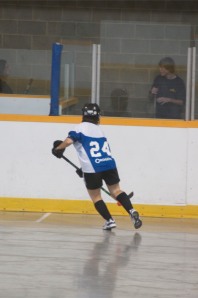 And of course ball hockey.  But while I have gone through seasons of intense hockey-packed schedules, this one I will never consider myself a specialist in.  I have been lucky enough over the years to play along side some AMAZING players though.

So now, after dabbling in pretty much everything that caught my attention in my first 30 years, I’ve found something I dig that I can concentrate on without becoming a specialist at any one thing in particular.  :p

Today I got up early, packed my bike in the car, and headed to Toronto for the MS Bike Tour.  It was the PERFECT day for the tour 🙂  Sunny, not too windy, not too hot, all good 🙂  Today was my 7th year in a row participating in the tour, although a few changes over the previous years:

– first year (I think) that we haven’t been rained on.  “Rain” being a huge understatement in most cases…

– not the first time participating in the Toronto tour, but switched over to the Niagara version 4 or 5 years ago after 2 Toronto tours in a row of riding in 8 degree weather with complete down pour.   It still rained for the Niagara tour, but at least that one is in August and not nearly as cold.  Going solo, I’m happy with the decision to switch back to the Toronto edition which is 55kms, versus the long 75km route in Niagara.  Did manage to raise $920 🙂  As much as I enjoy the rides, I really hope one day there will be no need to raise money for MS.

7th tour.  Not a rookie.  Yet every year I tell myself I will get out 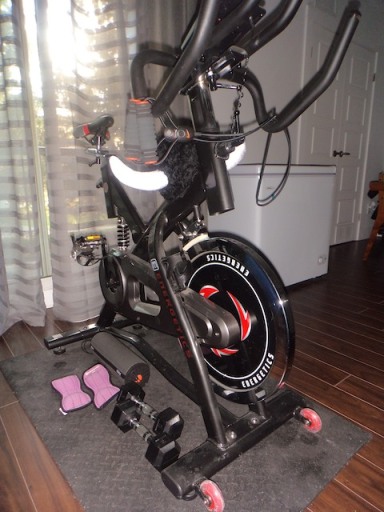 on my bike more to prepare for this ride, but like every other year, today was my first time on my bike this year.  Not so smart sometimes.  I mean, I have a totally awesome spin bike sitting in my apartment that I make great use of in the winter months.  It’s the perfect vantage point for any tv watching opportunities, but come summer…  The tv rarely goes on, and the bike becomes a great fixture for airing out hockey gear or drying laundry :p

Whatever, it was a great day anyway 🙂  The first half of the ride is a combination of flat road and some downhill stretches to make it down to the lakeshore.  Before the 15km check point, my water bottle slid out of its holder, ended up under my back wheel, and shot away from my bike like a canon ball!  😮 Oops!  There was a guy walking on the trail that just saw the projectile bottle and looked at me like I was some sort of criminal  😦  Kinda embarrassed, I just kept riding…  But once I realized how far I still had to go with no water, I regretted it!

At the half way point there’s a “lunch” checkpoint (nothing Paleo friendly offered there but I was smart enough to bring snacks) and we turn around and follow a slightly different path back up to the start.  I had another moment of brilliance heading to the checkpoint.  When you are slightly confused which direction to go, it’s maybe not the best idea to follow a guy in an Oscar the Grouch jersey who really doesn’t seem to know the way either.  Ended up heading a few kms in the wrong direction before we figured things out.  The second half was challenging at times.  There were some short and steep uphill bits, which I don’t mind since they are over quickly, but the long gradual ones just seem endless and suck a ton of energy out of your legs.  Not that it’s a race, but I was in the first 20 riders to complete the 55km route and on my big heavy mountain bike too!  Getting back in the saddle reminded me of how much I used to love biking…  Hopefully enough so to inspire more riding.

Needless to say, no crossfit again today.  Back in my usual routine tomorrow, starting my day with a 7:30 trip to the box 🙂  There’s some heavy lifting on the menu for this week, so hopefully my legs are ready for action tomorrow!  Side note — I got a new pair of Reebok Nano 2.0’s last week and I totally love them!  I feel more balanced when squatting, haven’t toppled backwards since giving them a try.  Even opted to wear them today for the ride just cause of the comfort level and they rocked!  Really grab the pedals well…  and they match my shirt.  :p

So, apparently my negotiation last week to do 4 days in a row at the box which I justified to coach by promising to stay away for the weekend, was not deemed legit when it was realized that I was not actually taking a weekend to rest.  No, instead I hoped on my bike for a “light” 3 hour ride.  When I showed up for my 7:30 workout this morning, I was busted again.  This time I hadn’t rehearsed a speech…  I just stood there all deer-in-the-headlights.  😮  Ok, so I maybe should have taken today off.  But when I read the WOD online last night, I was too much looking forward to it to stay away.  I went a bit easier today than usually, as I promised coach I would.  Still LOVED it 🙂  Tomorrow I will rest.

After completing the big 3 – Pick two of the following: Do 4 sets of 8-15, based upon load and feel. Good Mornings, GHD sit-ups, Reverse Hypers, Sit-ups, Planks (4x 30 Second holds)

Now I could eat a hippo…

Use the Carnivore Diet to break your own Health Code. Build general preparedness to enable you to do anything you want on whim, and have a robust body and mind to fight disease, illness and viruses. Improve your lifestyle as your life may depend on it.

Let's Do Keto Together!